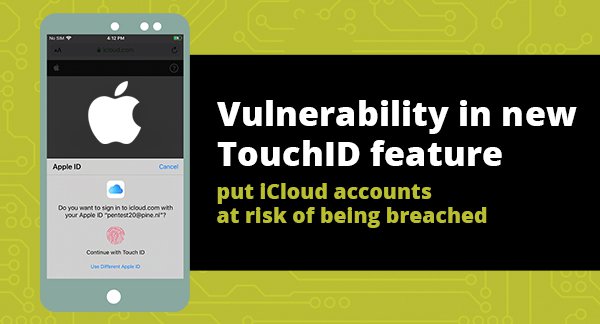 I recently found a vulnerability that could be used to gain unauthorized access to an iCloud account, by abusing a new feature allowing TouchID to log in to websites.

Logging in through TouchID/FaceID in Safari - no 2FA?

In iOS 13 and macOS 10.15, Apple added the possibility to sign in on Apple’s own sites using TouchID/FaceID in Safari on devices which include the required biometric hardware. 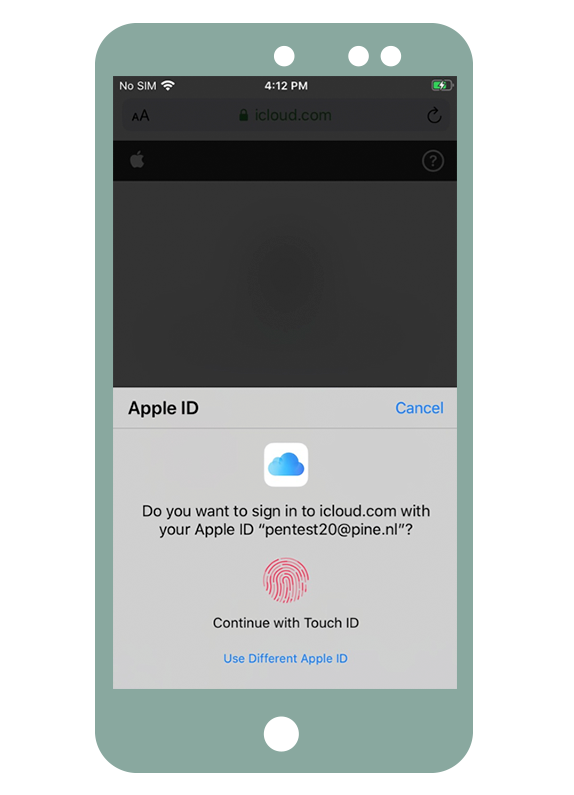 When you visit any page with a login form for an Apple-account, a prompt is shown to authenticate using TouchID instead. If you authenticate, you’re immediately logged in. This skips the 2-factor authentication step you would normally need to perform when logging in with your password. This makes sense because the process can be considered to already require two factors: your biometrics and the device. You can cancel the prompt to log in normally, for example if you want to use a different AppleID than the one signed in on the phone.

I expect that the primary use-case of this feature is not for signing in on iCloud (as it is pretty rare to use icloud.com in Safari on a phone), but I expect that the main motivator was for “Sign in with Apple” on the web, for which this feature works as well. For those sites additional options are shown when creating a new account, for example whether to hide your email address. 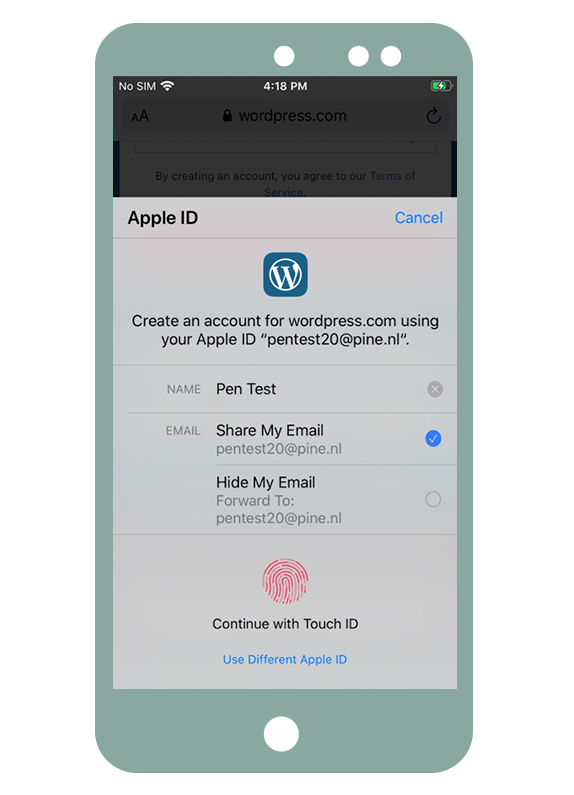 Although this vulnerability affects both macOS and iOS, with FaceID and TouchID and for all sites using AppleID logins, I will use iOS, TouchID and https://icloud.com as the example. Keep in mind that the impact is larger than just this!

Logging in on Apple domains happens using OAuth2. On https://icloud.com, this uses the “web_message” mode. This works as follows when doing a normal login:

Two of the parameters are very important in the iframe URL: the client_id and redirect_uri. The idmsa.apple.com server keeps track of a list of registered OAuth2 clients and the redirect URIs that are allowed for each client. In the case of the web_message flow, the redirect URI is not used as a real redirect, but instead it is used as the required page origin of the posted message with the grant code (the second argument for postMessage).

For all OAuth2 modes, it is very important that the authentication server validates the redirect URI correctly. If it does not do that, then the user’s grant_code could be sent to a malicious webpage instead. When logging in on the website, idmsa.apple.com performs that check correctly: changing the redirect_uri to anything else results in an error page.

Use of fake response by Safari

When the user authenticates using TouchID, the iframe is handled differently, but the outer page remains the same. When Safari detects a new page with a URL matching the example URL above, it does not download the page, but it invokes the process AKAppSSOExtension instead. This process communicates with the AuthKit daemon (akd) to handle the biometric authentication and to retrieve a grant_code. If the user successfully authenticates then Safari injects a fake response to the pending iframe request which posts the message back, in the same way that the normal page would do if the authentication had succeeded. akd communicates with an API on gsa.apple.com, to which it sends the details of the request and from which it receives a grant_code.

What I found was that the gsa.apple.com API had a bug: even though the client_id and redirect_uri were included in the data submitted to it by akd, it did not check that the redirect URI matches the client ID. Instead, there was only a whitelist applied by AKAppSSOExtension on the domains. All domains ending with apple.com, icloud.com and icloud.com.cn were allowed. That may sound secure enough, but keep in mind that apple.com has hundreds (if not thousands) of subdomains. If any of these subdomains can somehow be tricked into running malicious JavaScript then they could be used to trigger the prompt for a login with the iCloud client_id, allowing that script to retrieve the user’s grant code if they authenticate. Then the page can send it back to an attacker which can use it to obtain a session on icloud.com.

Some examples of how that could happen:

The first two require the attacker to trick users into visiting the malicious page. The third requires that the attacker has access to the user’s local network. While such an attack is in general harder, it does allow a very interesting example: captive.apple.com. When an Apple device connects to a Wi-Fi network, it will try to access http://captive.apple.com/hotspot-detect.html. If the response does not match the usual response, then the system assumes there is a captive portal where the user will need to do something first. To allow the user to do that, the response page is opened and shown. Usually, this redirects the user to another page where they need to login, accept terms and conditions, pay, etc. However, it does not need to do that. Instead, the page could embed JavaScript which triggers the TouchID login, which will be allowed as it is on an apple.com subdomain. If the user authenticates, then the malicious JavaScript receives the user’s grant_code.

The page could include all sorts of content to make the user more likely to authenticate, for example by making the page look like it is part of iOS itself or a “Sign in with Apple” button. “Sign in with Apple” is still pretty new, so user’s might not notice that the prompt is slightly different than usual. Besides, many users will probably automatically authenticate when they see a TouchID prompt as those are almost always about them authenticating to the phone, the fact that users should also determine if they want to authenticate to the page which opened the prompt is not made obvious.

By setting up a fake hotspot in a location where users expect to receive a captive portal (for example at an airport, hotel or train station), it would have been possible to gain access to a significant number of iCloud accounts, which would have allowed access to backups of pictures, location of the phone, files and much more. As I mentioned, this also bypasses the normal 2FA approve + 6-digit code step.

Apple's response to my responsible disclosure

I reported this vulnerability to Apple through their responsible disclosure program, and they fixed it the same day they triaged it. The gsa.apple.com API now correctly checks that the redirect_uri matches the client_id. Therefore, this could be fixed entirely server-side.

It makes a lot of sense to me how this vulnerability could have been missed: people testing this will probably have focused on using untrusted domains for the redirect_uri. For example, sometimes it works to use https://www.icloud.com.attacker.com or https://attacker.com/https://www.icloud.com. In this case those both fail, however, by trying just those you would miss the ability to use a malicious subdomain. 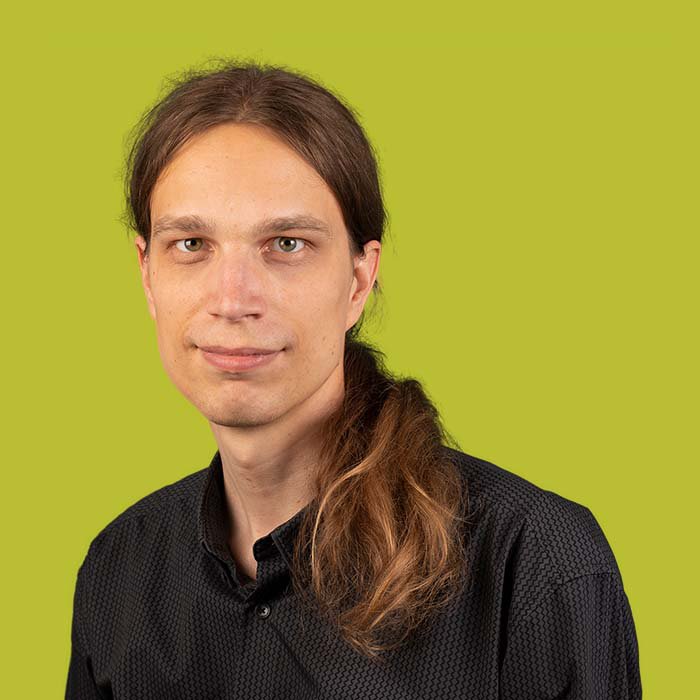